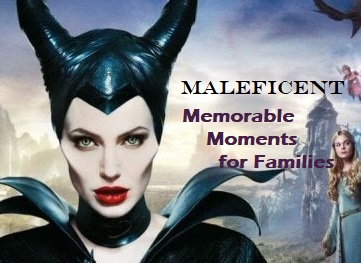 It’s worth remembering that Disney’s Maleficent began the current live action adaptations we’re all so familiar with nowadays. Always the trendsetter, this one!

First off, if you haven’t seen the film and don’t want to find out about some of the major plot points before hand, maybe save this article for later.

I will say that this movie differs from Disney’s animated version of the fairy tale in almost every scene of the film. To that I quip, “Hence the title!” It’s not called Sleeping Beauty, it’s MALEFICENT. I find this confusion bothersome…it reminds me of the grumbling that occurred when Disney’s California Adventure opened. People were upset because it wasn’t enough like Disneyland. Huh? Get a clue – buy a vowel if you have to – enough said.

I really enjoyed this movie. I was pleasantly surprised at the movie’s PG rating, making it much more accessible to families. It was extremely entertaining for both adults and children. I have only one minor complaint, and that is I wish they had kept the three fairies’ names as Flora, Fauna, and Merryweather (always partial to a chubby fairy!). Instead, they were odd names I can’t even remember – something like Featherdown, Dinglehopper, and Shortstop.

What struck me numerous times while watching Maleficent is how full it was of life lessons. It was rich with choices made, and the resulting consequences of those choices.

Towards the beginning of the movie, a young Stefan befriends an equally young Maleficent, points to the castle in the distance, and vows to be king some day.

It doesn’t take very long until we find out to what ends Stefan will go to make this desire a reality.

Grandiose goals and lofty dreams aren’t harmful in and of themselves. However, when they don’t align with God’s will for our lives — WATCH OUT!

For I know the plans I have for you, declares the Lord, plans for wholeness and not for evil, to give you a future and a hope. Jeremiah 29:11 (ESV)

When our dreams and desires don’t jive with God’s plan, we can be met with destruction. If you recall, it didn’t work out so well for Jonah. He ended up much like Pinocchio hanging out in Monstro’s belly.

Lesson #2: Oh Be Careful Little Mouths What You Say

Betrayed and disfigured by King Stefan, Maleficent shows up at Aurora’s christening with an agenda. It’s payback time!

Maleficent curses the baby, vowing that before the sun sets on her sixteenth birthday she will come in contact with a nasty-ol’ spindle, and once pierced, will crash like a tranquilized rhino for all eternity. She adds a key statement in all of her glowing, green revelry, and that’s that no power on Earth can undo this curse.

Fast forward about fifteen years later, and we find that Maleficent has grown terribly fond of Aurora, whom she endearingly refers to as “Beastie”…in a British accent, much like Captain Jack Sparrow.

One night as she tucks a sleeping Aurora into bed, Maleficent tries to reverse the hex she knows Aurora is soon doomed to face. It doesn’t work, as we hear echoes of “no power on Earth” whispered in the background.

In our anger, in our hurt, in our most painful moments we are bound to say things we regret. Words are powerful, so be careful. Once spoken, they aren’t easily forgotten.

Death and life are in the power of the tongue… Proverbs 18:21 (ESV)

This lesson was actually brought up by a question my daughter asked after the movie.

In the final scene between Aurora and Maleficent, before her fateful meeting with the spinning wheel, Aurora is pained at the realization of who Maleficent really is – the evil fairy who cursed her as a baby. Aurora, in so many words, kicks Maleficent to the curb.

However, once awakened by “true love’s kiss”, Aurora is happy to be reunited with Maleficent.

My daughter’s confusion came over this mood reversal. She didn’t understand why Aurora was glad to see Maleficent when she woke up, when she had been so upset with her before entering the eternal slumber.

I explained that our actions tell much more about our character than our words. Try as she might, Maleficent was incapable of hating Aurora. As she watched Aurora grow, Maleficent’s actions spoke to her love for her, even when her words didn’t. Over the span of sixteen years, this would have been something Aurora inherently knew. That’s why when she awoke, all was essentially forgiven between them.

We’ve all had dealings with people where words are hollow because we’ve seen the lack of character behind them. On the flipside, we can more easily forgive a wrong doing when we trust someone because of the good character they’ve shown time and time again.

With that, I think I’ll wrap it up. Analyzing movies is not something I’m trained in, or have any expertise in doing. These are all my own opinions about a movie I enjoyed watching with my own children. If any of these points help with discussions in your family, then color me pink…no, blue!